Have you sung along to all the silly love-songs you hate?
And have you had to pinch yourself to make sure you’re awake?
Have you ever felt like you could float into the sky?
Like the laws of physics simply don’t apply?

– Have You Ever Been In Love?

Here’s a question – how many albums have their big single as the last track?

Not many I can think of. This is one. The song that finally saved this record from sinking without a trace is at the end of it – “I Like”, one of the loveliest of the lovely things on this record.

The Divine Comedy are still a recent discovery for me. Although in the last few years I have been hooked. Also, in Britain, Neil Hannon is everywhere – from the IT Crowd, Doctor Who, Hitchhiker’s Guide to the Galaxy and even the Ashes. He is the go-to guy for something British sounding. Having had several side projects, he finally made a Divine Comedy record. And it’s great.

From the first song you know it’s something special. Down In the Street Below could well be Hannon’s masterpiece. A five minute seduction that builds from surgically precise lyrics to a swooning lovely string laden chorus. Have You Ever Been In Love adds to the MGM musical feel.

Part of this album, and Hannon, for me, is the Britishness. When I first heard At the Indie Disco, I thought it was daft – a reeling off names from the indie world (Blur, Wannadies, etc). But I think of my nights at Notting Hill Arts Club, the regular seat we took and dancing our asses off. Maybe it’s a British Indie thing, those types of clubs. And Hannon nails it.

Then there’s I Like. Almost an afterthought, it was championed on radio and finally released as a single. Is it Hannon’s best song? It could be. Spritely and fun, it’s a simple love song – one that obviously connected with people. That rush of love, when you just like everything about someone, in a three minute pop song. I challenge you to hear it and not think of someone in your heart.

There’s not a bad track on here – in fact there’s not a track that is only OK either. Some of the deeply orchestral stuff has been set aside, as have some of the guitars. It’s a clear pop album. It’s been years since Hannon has communicated his world so clearly and without trappings. If people still thought of careers in terms of old models, this is a Graceland style late era revival.

Then there’s all those little things I love about albums. There’s a great end of side one/start of side two feel. The album cover is fantastic and even better on vinyl. 12 songs, 45 minutes. Just classic stuff in my world. While making my top ten list, this album just refused to budge. This album just made me so happy this year, and what the hell else should music do?

Eight (or ten, depending on how you want to count it) albums in, and amazingly, I would recommend this album as the best place to start. I’m not sure if there was a deliberate attempt to make an accessible but it’s worked. Hopefully I Like manages to sneak into radio stations and mix tapes, and the wonders of this album spreads.

And if you’ve not heard the track, you must hear I Like.

Best tracks: I Like, Down In the Street Below, At the Indie Disco

A cheap film clip was made for I Like, to capitalise on the radio play I think. The song deserved a little better, I think!

Welcome to the Leaps And Bounds obligatory end of year lists.

Starting with ten albums that fell out of the top ten that I wanted to write about. This was culled from a big list. Several albums, such as ones by Old 97s, Crowded House, Nada Surf, Vampire Weekend and Lazy Susan did not make this list. Even though I like them more that some records here, they are a) pretty obvious for me and b) not much more to say other than I love them and they are great. Here are 10 fantastic albums that, on the whole, surprised me with how good they are.

(These ten are not really in order)

It only doesn’t make the ten because it’s too long, and large sections of it pass me by. But the highlights (The Suburbs, Modern Man, City With No Children, Month of May) are out of this world. I love a good concpet album, and I love the Springsteen working class element. I also love that they made something eally simple and open, after the bleak darkness of Neon Bible. A landmark record by an important band. 12. Free Energy – Stuck On Nothing
DFA

There’s a fair bit of hype on these guys, mainly cos they are on DFA Records and their album is produced by James Murphy. But I wonder what the indie hipsters make of it when it basically sounds like a Cheap Trick record. Sweet, 70s guitars, and a carefree pop sense makes this album a lot of fun. The kind of fun usually associated with power pop and the kind of retro-dagginess that is found in bargain bins quite quickly. I love me a bit of silly stadium rock and I’m glad someone else thinks so, here in 2010. This record is worth noting for the breathtaking opening track – Excuses. It is my song of the year. It’s heartfelt Spector-ish pop, with a mountain of strings. The rest of the album does not live up to that track, but there’s plenty of pretty moments. If they can trump Excuses on their next album then we have a keeper.

I’ve not really loved a Pernice Brothers record since 2001’s The World Won’t End. In fact – I wrote them off. But this record came out of nowhere. It doesn’t break a single boundary, but it is significantly better than the last 3 of their albums. There is an element of fun. We Love the Stage in particular is kind of – funny. And Joe Pernice is about the saddest songwriter I know. The guitars sing, the songs are crisp and even Joe sounds excited to be there. It wont change their career but I’ll be pretty happy if they keep making this album for the rest of their career.

I loved She & Him Volume One so much, it was going to be tough to follow it up. Initially, this album was a bit of a letdown – the innocence and naivety had gone. But slowly the sweetness, and that voise, won me over. A little more produced than their debut, it was  fragile and lovely thing regardless. It would be suicide if this was Volume Three, but as an act trying to cement a career, this is a fine effort. This is their LCD Soundsystem album. All sound and rhythm. These guys can almost do no wrong. Killer chops, a one of a kind voice and musical turns that no one sees coming. Coming off their most produced and slick album, they made something raw and daring. A for effort, and B+ for songwriting – kind of let down by a long record, lending an air of being unfocussed. Would have been a monster of a 10 track album. A friggin excellent guitar record. It hints at the interplay found in Television, but riffs as simple and primal as Nirvana. They perfect that indie guitar and vocal sound too. The album is short, sharp and snappy. I have no idea what any of the songs are about either. What is worrying is everyone I know who knows these guys reckon they are the biggest cocks they have ever met. So much so that it’s tainted them, leaving them sitting outside the ten. That said, even good albums happen to bad people.

Five years since their last album, the Fannies return with their lushest, warmest album to date. We are so far away from that noisy four piece band from the 90s. Sometimes the lyrics kind swing towards banality, but on the whole the loveliness cuts through. This record is one big, happy hug. So many highlights too – Baby Lee, Dark Clouds, When I Still Have Three to name but a few. I kind of miss having a couple of rockers but I repsect these old hands for trying something different. 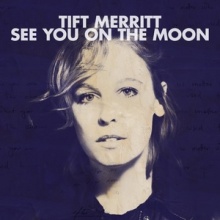 19. Tift Merritt – See You On the Moon
Fantasy

So many of those country-ish songwriters I used to love have fallen by the wayside. Merritt was never one of my favourites, but her last album, Another Country, was something special. See You On the Moon makes it two for two. It’s hard to explain why – other than it’s a solid album. The songs are her best yet – always tender and clever without being showy. Merritt is in fine voice. And it’s what’s not there that makes the difference. No self centered depression, cartoonish genre studies or any need to show off at all. There are times when I feel like a smart, simple songwriter album with no faults, and this year was this one. It may be a little unspectacular but damn it’s good.

And now for something completely different. This album is utterly mad. With all the stops and starts, I wonder if the mastering house put the CD gaps in the wrong place. It was a year for rock, and this was easily the weirdest rock album of the year. Four 7-minutes-plus epics, usually played at thundering pace and a hail of lyrics, all based around the American Civil War. It’s definitely an American brand of rock – part Springsteen (again), part Neutral Milk Hotel. It’s played with such passion I don’t know if it’s a band or a knife fight.